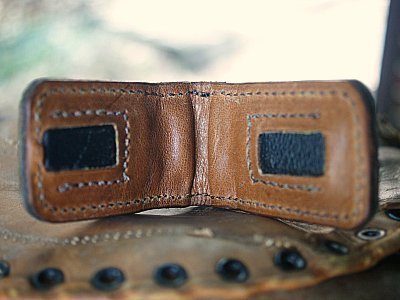 Minimalist For Sure, With That Touch Of Nostalgia That Will Be Right At Home In Your Pocket

Who cares about baseball? YOU DO! Yeah, we do, too. And we love nothing more than to create a new item from well-worn baseball glove leather. In fact, our Men’s Magnetic Money Clip is KILLER! Seriously. It has that great feeling of old baseball gloves, right? It smells like a baseball glove. And… This men’s magnetic money clip is here waiting for you.

Think back to when you played the game yourself. Or maybe think about the first time your dad took you to a game. Baseball is an important part of American history. We remember names like Babe Ruth, Roberto Clemente, and Ty Cobb.  Baseball is our national pastime and our national sport. Why not grab a piece of history? It will be an amazing conversation piece, and the stories you’ll get from your friends, right? C’mon… You know you want to. We have your money clip right c’here.

Add a review Cancel reply
Have a coupon? Click here to enter your code

Find Us on Social Media: